Born in Umbria and having graduated in Political Science, Tardioli began her diplomatic career in 1991. Her first role was at the Ministry of Foreign Affairs and International Cooperation (Farnesina), in the Directorate General for Migration and Social Affairs, where she remained for one year before being appointed as Commercial Second Secretary in Tirana, Albania.

In 1995, she was promoted to First Secretary and became Consul at the Consulate of Italy in Nuremberg, Germany. In 1998, she held the position of First Secretary in Riyadh, Saudi Arabia. In 2000, she returned to Rome, as Head of Office of the Directorate General for Cultural Promotion and Cooperation. Four years later she became Counsellor to the Permanent Representative to NATO, Brussels. In August 2008, Tardioli became Italian Consul General in Tripoli. Two years later she again took a position at NATO in Brussels, this time as Deputy Assistant Secretary General in the Operations Divisions.

Since September 2016, she has been the Deputy Political Director and Principal Director for the United Nations and Human Rights, a division of the Directorate General for Political Affairs and Security.

Now she arrives in Australia to further enhance bilateral relation between both Australia and Italy. Com.It.Es wishes her all the very best on a successful posting and we cannot wait to host her in Adelaide during her first official visit. 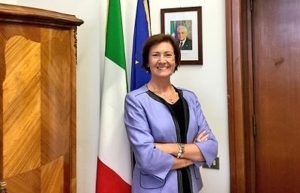